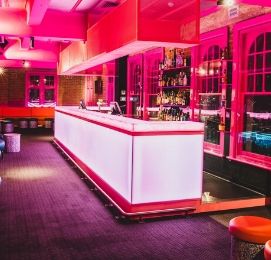 Hobart is often referred to as the “sleepy town”. While there are some parts of the southern city that have the slow and quiet charm of a country destination, the city has come of age in recent years. Once the sun goes down, Hobart is starting to Buzz. We’ve done the hard yards (dancefloor testing, cocktail sipping, pub crawling… the usuals) for you and have compiled a list of the top nightclubs on offer. No matter the occasion Hobart has some night time entertainment on offer to keep you entertained all week long.

Preachers is about as close to an inner-city Melbourne vibe as you can get outside of Victoria. The comfy, mismatched lounges, open fire places and cheap tapas are a major draw cards for crowds of party-goers every night. Sprawling out into a grass yard, means there is plenty of space and every reason for you to whip out your sprinkler or test out your trusty lawn-mower.  The best part of this venue is that it has a bus. Not a come-pick-us-up courtesy bus, but a stationary, full sized former tour bus with tables, chairs and gorgeous women drinking beer. If you’re not one to bust a move, you can even play driver at the wheel of the bus.

If you’ve ever visited Hobart before, you’ve probably stumbled across Republic. With old men propping up the bar and a pumping beer Garden filled with locals, it looks pretty true-blue Aussie pub. But this honest-to-goodness pub is one of the busiest joints in town. Boasting an impressive lineup of live music every week, you’ll be movin’n’shaking until the early hours of the morning.

Dreadlocks and peace-sign necklaces are optional but preferred at this Caribbean bar. When you’re surrounded by the old-time Havana mural, pastel-coloured stools and palm painted windows, you’ll have a hard time believing that you’re actually in downtown Hobart. Don’t plan on just dropping in though. The Reggae rules insist that you’re obliged to try every single one of the killer cocktails on offer. We promise your resulting dance moves will have the ladies lining up around the block for a piece of you.

As Hobart’s only dedicated gay bar, the team at Flamingos Dance Bar have taken it upon themselves to go all out. You can expect, glitz, glamour, pumping tunes and plenty of sequins. Don’t be scared off by the OTT decor though, this venue opens their doors to party goers from all walks of life.

Affectionately known by locals as ‘The Tele’, Telegraph Hotel is a destination for anyone looking to party hard. With happy hour rolling around every week, it won’t take long before you try your hand at karaoke or strut your stuff on the dance floor. The crowds start rolling in early, and nobody starts leaving until late.

Your best buddy may be about to embark on the adventure of a lifetime with his soul mate, but that doesn’t mean he’s ready to wave goodbye to the bachelor life just yet. Let your Buck channel his inner wild streak at the place where the young, hip Hobart locals let their hair down. Ivory Lounge Bar opens its doors from 10pm every Friday and Saturday nightl, and the house, tech, tropic and afro beats pump until the early hours of the morning.

Twisted Lime is best described as a groovy dive bar. The relaxed and friendly nightclub is the home of cheap drinks and cruisey vibes. With 8-ball tables and chalkboards you can actually draw on, your two left feet won’t prevent you from having a good time. The bartenders are known around town as some of the best in the business – make sure you order the local special. You can thank us later.

With a name like that, it shouldn’t come as a surprise that Syrup Nightclub promises a sweet night for everyone. Situated on the bottom side of town, this double story hub is the last nightlife hotspot before you reach Antarctica. The vibe DJs fire 70s, 80s and 90s tunes every night to a crowd that knows every word to every song. It’s just like being at a party at your mate’s house – minus the morning after clean up.