It’s a sport traditionally associated with pristine white uniforms, grey-hair retirees and an ultra conservative vibe. However, Barefoot Bowls has recently undergone a youthful transformation and it’s being taken over by 20-something larrkins. The new relaxed rules and free flow of shandy (hold the lemonade) makes this the perfect activity for your bucks party.

Lawn bowls date back around 7,000 years and the relatively light physical demands and relaxed pace traditionally attracted your Grandpa and his mates. While the oldies are still going strong on the greens, the younger generations have revitalised the sport – giving it a peeled back refresh. Kick off your shoes, cancel your arvo plans and prepare to grab some balls.

Barefoot bowls is the not-so-new but definitely improved version of the sport, where grey hair is no longer a requirement for playing. The aim of the game is purely to have fun. If you’re a little too competitive for that you’ll need to get your bowl to the precise target area, or closer to the mark than anyone else. The higher the number of bowls closest to the jack, the higher the score. The game is generally played in teams of 2 – 4 players, but can really be tailored to suit a group of any size.

Our favourite part of playing lawn bowls is that it’s probably one of the only sports that you can play shoeless, with a beer in hand and without breaking a sweat. Whether you win, lose or cheat your way to the end, the oldies promise one thing – the bar is always stocked for post game drinks and the banter is top notch.

5 Reasons to do Barefoot Bowls in Dunedin 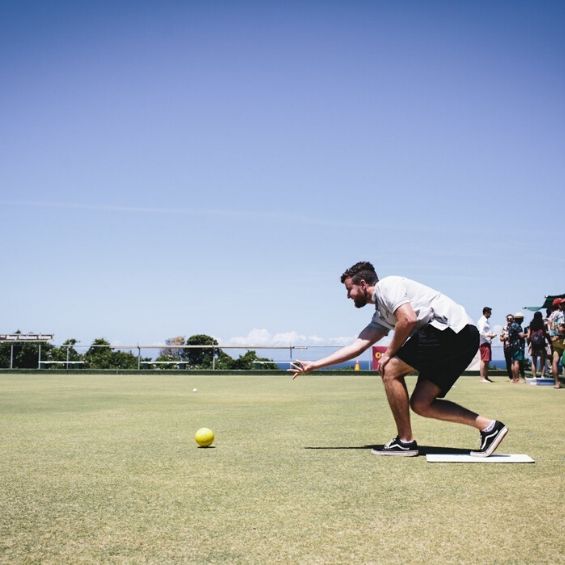 Making the most of Barefoot Bowls Dunedin

As the locals like to say, Dunedin is a #dunnerstunner. Nestled in a sheltered harbour on the east coast of New Zealand’s South Island, this city is an all-rounder. The landscape is like something out of an art gallery. Being a coastal city, there are several beaches scattered along the coastline, offering the chance to sunbathe, surf, swim and snorkel.

A little further back from the water, the region transforms into a biker’s playground. The summer climate of mild temperatures and relatively late sunsets lends itself to mountain biking. The compact and flat terrain of the CBD means it can easily be scaled by bicycle or foot – that is except for Baldwin Street, which is considered the steepest residential street in the world. Locals take advantage of this unusual slope by hosting an annual Jaffa Race down the road. All that adventuring is likely to leave you a little parched.

Thankfully, Dunedin has plenty of watering holes, pubs and cocktail bars, so that you can sip your way through the city every night of the week. Being a student city means that there is always a bustling dance floor, always a welcoming crowd and never a shortage of drink specials. Wicked Bucks has done the hard yards to uncover the local gems and we’re ready to share our top secrets with you. Get in touch and we’ll start tee-ing up the party of the century.