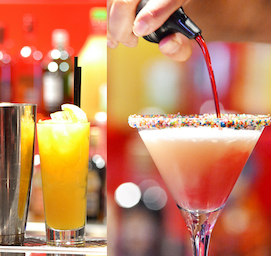 Gay Bars and Clubs in Perth

Who would have thought that the Wild, Wild West would be the place to go for a gay night out? For a small city, Western Australia’s capital has a surprisingly impressive range of options for gay bars and clubs. With a selection of strictly LGTBQI-oriented venues, as well as some mixed but welcoming joints, there’s a vibrant and accepting nightlife scene. Perth’s gay clubs are some of the most innovative and fun in the country, offering regular themed nights, performances, world class DJs and killer drinks menus. These bars and clubs are the types of places where a quick MaiTai in the cozy courtyard, can turn into an all night rager on the dance floor. Whether you’re searching for a big night out on the town, epic tunes or awesome drink special, Perth is the place for you.

Picture this…You’re ripping up the d-floor to Katy Perry with all your buddies, while you’ve got a Blue Unicorn (Grape liqueur, Ketel One vodka, Blue V Energy & strawberry syrup) in one hand and a slice of $10 meat lovers pizza in the other. Just as the beat is about to drop, bubbles explode from all corners of the club, and confetti shoots from the ceiling. The crowd of enthusiastic groovers goes wild and the Top 40 tunes continue to pump until the sun begins to rise. Like the sound of it? A night out at The Court promises all this and more. Boasting a rooftop terrace, indoor and outdoor bars, and a bustling dance-floor, this venue is known as the place to be for the LGBTQI crowd on the weekends.

Almost every Perth local will have heard of The Court, with most having ended up there on a night out in Northbridge at one time or another. The team behind this popular club regular throw themed party, which often have a gay twist. Drag Queens, cabarets shows and other performances are a regular occurrence at The Court. Unlike most other nightlife hotspots, this club is actually known for its exceptional, reasonably priced pub fare and creative cocktail menu. If you need a break from the music, the courtyard is the perfect place for a breather and some quieter conversation. It’s a win, win, win.

At 40-years-old, Connections Nightclub is one of the country’s oldest gay clubs. After opening its doors in 1975, the club has undoubtedly won the hearts of thousands of locals and tourists alike. It was once an underground club and for more than a decade cameras weren’t even allowed on the premise, but with increasing acceptance in the community, Connections is now a hot destination for Perth’s partygoers. The club earned its reputation for attracting big name local, national and international artists, as well as throwing regular themed nights. You can expect weekly Drag performances, Bingay and even lesbian mud wrestling on a Wednesday.

The glittering disco balls, strobe lighting and smoke machines ensure that the d-floor is poppin’ every single night of the week. It’s the type of place where you can whip out the lawnmower or test out the worm, and no one will even bat an eyelid. When you’re looking for somewhere to rest up your feet and stretch out your hips after one too many slut-drops, the rooftop bar is the perfect place to escape for some fresh air. With an unparalleled view of Perth’s skyline and beyond, it’s too easy to lose track of time up here. Connection is often the last stop of the night for party-goers in Perth, but it’s definitely one that should not be missed.

Hula Bula isn’t strictly an out-and-out gay club but its friendly and accepting atmosphere means it is welcoming of all walks of life and is a popular haunt for the local LGBTQI community. The tiki-themed rum bar is decked out with tropical greenery, moody lighting, plush lounges and wicker decor. The impressive array of rum-based cocktails are a major attraction for party goers, and with 175 kinds on offer, your biggest struggle may be choosing which one to start with. That’s where the helpful team of expert bartenders come in.

As cocktail connoisseurs, this team of amazing staff can whip you up a secret, drool-worthy concoction that will have you coming back for more and more. The laid-back music is a cool change from the regular club scene. Vintage tunes are played on vinyl all night, with some records being original sixties tracks. There’s just enough room to whip out your dance moves, without having the full-blown d-floor set up. Weekly specials are complemented by one-off events like rum tasting and album launches. Open every day of the week in the heart of Perth’s, a night at Hula Bula is an absolute no brainer.